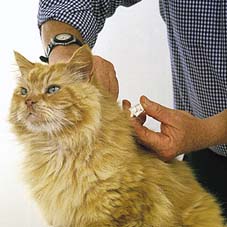 Microchipping your pets is easier, and cheaper, than you might think.  This is also a sure-fire way to have your pets returned to you should they become missing.  The cost is only $15 per pet.

While walking through the Wood Streets a few weekends ago, Tara and I witnessed a beautiful white and gray cat unwittingly run across Bandini Avenue wherein he was instantly killed by a passing automobile.  I immediately called the Riverside City/County Animal Shelter at (951) 358-7387 (PETS) and waited for the Animal Control Officer.  The officer mentioned that the cat was probably not a stray because of its healthy appearance; however, since there was no collar, it would be difficult to locate the owner unless there was a microchip.  Every pet (dead or alive) that is picked up by Animal Control is scanned for a microchip.  Unfortunately, the officer stated that not enough pets are microchipped.

The microchip is inserted under the skin of the neck area of your pet.  The chip is very small and the insertion process is relatively painless.  Scanners are used by all animal shelters in Riverside County, and animals are scanned when they initially are brought in and at each step during handling, but especially prior to euthanasia.

Even indoor pets should be microchipped — sometimes they escape by accident through an open door, or  because they’re frightened by fireworks or thunder.  We’ve had all of our pets microchipped and feel confident they’ll be returned should they ever become lost!

The 1st Annual Spay-ghetti Dinner Animal lovers and “foodies” alike are invited to a scrumptious spaghetti dinner for a great cause!  The Mary S. Roberts’ LIFELINE Spay/Neuter Subsidy Program provides low income pet owners the opportunity to get their cats and dogs spayed or neutered at a very low cost.  The more pets that are…

[ SOLD for $335,000 ]    “Wood Streets Neighborhood” two-story stucco Tudor Revival has been in the same family for many years!  Built in 1931, this home is much larger than it appears! There are a total of 6 bedrooms (4 downstairs, 2 upstairs) and 3 bathrooms (2 downstairs, 1 upstairs).  One of the bedrooms downstairs is smaller…

On our Nation’s 234th birthday, Tara and I gathered a wonderful group of friends (for the 13th year in a row) and set out at 6:00 a.m. from my “Wood Streets” home to deliver approximately 2,000 American flags!  Each of us grabbed a few bundles of flags, set out to different sections of the neighborhood, and carefully placed…

Now in its 19th year, the Mary S. Roberts Pet Adoption Center’s “Walk With The Animals” will take place at Fairmount Park near the band shell area from 8:00 a.m. to noon.  The event is free and open to the public.   Walk participants are encouraged to collect pledges to sponsor their effort.  There are categories for…